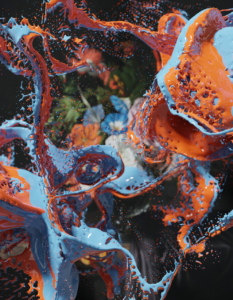 The word „pwned“ originated in video game culture and is a derivative of the word „owned,“ due to the proximity of the „o“ and „p“ keys. It is typically used to indicate that someone has been controlled or compromised, e.g., „I was pwned in the Adobe data breach.“

Artwork in the digital realm raises many new questions, especially about authorship.
Specifically in light of global digital networks, the question arises of how traditional collecting societies should deal with the changing environment. Not least, the current discussion about NFTs illustrates the topicality of this issue.  In a blockchain, for example, all data sequences are protected. However, artists have always copied other artists or been inspired by them. A central question that arises from this is, at what point does one speak of a new work of art and a new authorship?

In the digital world, not only is an idea recycled, but complete data sets are used that an artist has already used before. Can we apply known theories, such as the expanded concept of art, to the artistic digital realm?
On the visual result level, a new work of art is created relatively quickly. If a small string of characters is inserted in a comparable way, as with human DNA, this has a large visible impact, even if 99% of the data set remains the same.

Chrisitan Holze experiments even further in his new works.
He mixes historically known works of art that he finds on the Internet with 3D programs and puts a randomly selected particle simulation over the historical layer. Then the work is printed and painted over anlog.
To take the whole thing to the extreme, he creates a file with the new work and makes it available to everyone according to the open source idea that originated back in the 80s.

Only the analog work can be used in the traditional sense.

The digital work is made freely available to society.