flourish – nature is a given fact 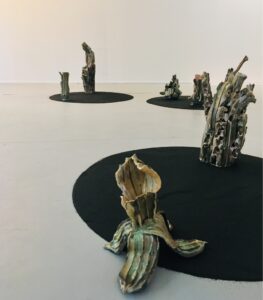 The combination of nature (science) and art is nothing new. Everything is based on the individual perception, which can be based on science as well as natural science. The perception of the environment, the processing of information, the concentration of information on essential aspects of contemporary confrontations and the environment is a constantly recurring theme in modern society. The exhibition flourish – nature is a given fact asks about the cycle of deepening perception and nature in connection with individual physical action and the constantly changing social events. An artistic examination of nature and society through the works of Carolin Ott, bn+BRINANOVARA, silvia hornig, Katrin Paul, Charlotte Rahn and Isabella Sedeka.

Right to free the plinth 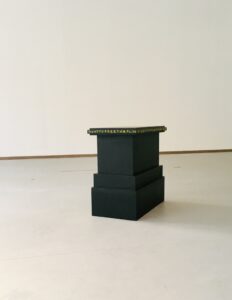 From politics to natural sciences, each revolution removes the images of the former power. In other words, the revolutionary action of removing the power in force is exhibited by way of demolishing its images. Or rather, this is how it should be. In fact, it sounds more like: the revolution replaces the current power and its action goes through substituting the previous images with current analogues. Indeed, after each revolution a new power is established. Which means that after the revolution has happened, it becomes the power – just because there is no real possibility to keep a “spear sit” for the power-position.       However, if the immediate consequence of revolution is the establishment of power, what if we subvert the image? Is it possible not to replace it with a newer one?

The long time of instability, which we are living because of the pandemic, unravels a “different thinking”: ourselves are the first thing to be subverted in order to act a real change. It seems that, many times, revolution cares more on revolution itself than on the revolutionaries. It’s all about the idea of the revolution, its image. Nonetheless, the peculiar contingency lets us experience how much the concrete presence of silence – as a result of the uncertainty – overwhelms the ephemeral presence of images. What if we take the advantage of this on – going revolution, this temporary hole, for not filling it?

The work Right to free the plinth concerns the fact of everyone being so into the idea of tearing the statue down that they don’t see the freed pedestal. We thought of focusing on the pedestal. If we unhinge the idea, taken for granted, of a pedestal for the statue, of the pedestal enslaved to the statue; if we subvert the order of the image imposed by the power, could the plinth stand alone?

Tutto Paletti is a kind of intimate activism for forgotten causes.