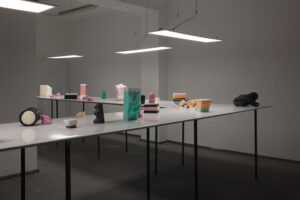 Giorgio Brina and Simone Novara are interested in generating transdisciplinary links between different ambits of research, by considering the role of the contemporary artist as the web. They, indeed, combined different formations (sculpture, painting and architecture) and cultural environments (Italian and British). bn+BRINANOVARA theoretical study and artistic production articulate around the question ‚how many places can an image live?‘ and overcome the personal imposition for a non-authorial condition of freedom. The place as a codified space-time portion has a key role for their research, interested in transit and translation processes, indeed by being shell for the transit of images as information. The aim is to re-invent the place: to create fertile territories for the epiphany of the image. bn+BRINANOVARA looks at the forces that gave form to the cultural context for taking on a complex study onto materials and their possible recombination. Their production is characterised by artistic objects devoted to the ironic and emphatic provocation of the cultural rigour we are frequently enslaved to, inviting us to observe things from a new perspective.